In old days, it was believed that the seventh son, in a family of sons, was a conjurer by nature and that he could work wonders like the fairies and cure diseases better than any doctor. If he were the seventh son of a seventh son, he was himself a wonder of wonders.

There was always great rivalry between these conjurers, and the monks who made money from the Pilgrims at Holy Wells, but a fellow called Huw, a great conjurer, kept on friendly terms with the monks. They often ate dinner together for Huw was a great traveler over the whole country and always had news to tell to the holy brothers who lived in cells, particularly about his adventures outwitting robbers.

One night, as he was eating supper at an inn, four men came in and sat down at the table with him. By his magical power, Huw knew that they were and robbers meant to kill him that night, in order to get his money.

So, to divert their attention, Huw made a statue of beautiful woman grow up out of the center table, and then he laid a spell on the robbers, so that they kept дивлячись at the curious lady all night long, while he went to bed and slept soundly.

When he rose in the morning, he paid his bill and went away, while the robbers were still дивлячись at the statue.

Now at Bettws-y-Coed there was a hotel, the named «Inn of Three Kegs.» The shop sign hung out in the front. It was a bunch of grapes set below three small barrels.

This inn was kept by two sisters. In that very hotel, several travelers, while they were asleep, had been robbed of their money. They could not blame anyone nor tell how the mischief was done. They had kept their doors locked during the night with the keys in the keyholes. They were sure that no one had entered their rooms. There were no signs of men’s boots, or of anyone’s footsteps in the garden, while nothing was visible on the door lock or, to show that either had been tampered with. Everything was in order as when they went to bed.

Some people doubted their stories, but Huw the conjurer believed them and was determined to solve the mystery.

When Huw arrived one night at the inn, they all chatted together merrily. Huw, who was always ready with a good story, told the two sisters about the various kinds of people and the many countries he had відвідали. All the vivid stories came from his imagination, for he had never set foot outside of Wales.

When he was ready to go to bed, he said to the ladies:

«I like to keep a light burning in my room, all night, but I will not ask for candles, for I have enough to me last until sunrise.» So saying, he bade them good night.

He entered his room and locked the door, undressed, and laid his clothes near at hand. He drew his вірного sword out of its sheath and laid it upon the bed beside him, where he could quickly grasp it. Then he pretended to be asleep and even snored.

It was not long before, peeping between his eyelids, only half closed, he saw two cats come stealthily down the chimney.

When in the room, the animals frisked about, and then gamb
oled and romped in the most живий way. Then they chased each other around the bed, as if they were trying to find out whether Huw was asleep.
Meanwhile, the supposed sleeper kept perfectly still. Soon the two cats came over to his clothes and one of them put her paw into the pocket that contained his purse.

At this, with one sweep of his sword, Huw struck at the cat’s paw. The beast howled дуже, and both animals ran for the chimney and disappeared. After that, everything was quiet until breakfast time.

At the table, only one of the sisters was present. Huw politely inquired after the other one. He was told that she was not well, for which Huw said he was very sorry.

After the meal, Huw declared he must say good-by to both the sisters, whose company he had so enjoyed the night before. In spite of the other lady’s many excuses, he was admitted to the sick lady’s room.

After polite greetings and mutual compliments, Huw offered his hand to say «good-by.» The sick lady посміхнулася at once and put out her hand, but it was her left one.

«Oh, no,» said Huw, with a laugh. «I never in all my life have taken any one’s left hand, and, as beautiful as is yours, I won’t break my habit by beginning now and here.»

Reluctantly, and as if in pain, the sick lady put out her hand. It was bandaged. 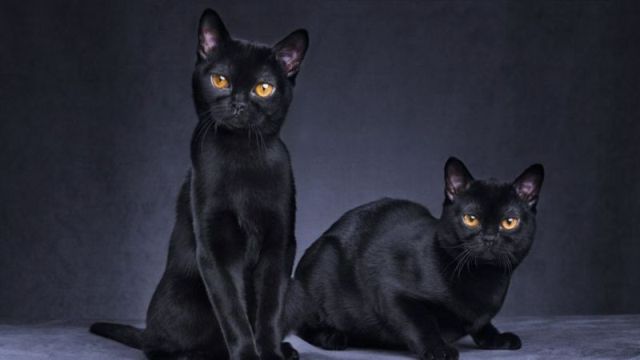 The mystery now cleared up. The two sisters were cats.
By the help of bad fairies they had changed their forms and were the real robbers.

Huw seized the hand of the other sister and made a little cut in it from which a few drops of blood flowed, but the spell was over.
«Henceforth,» said Huw, «you are both harmless, and I trust you will both be honest women.»

And they were. From that day they were like other women. Neither as cats with paws, nor landladies, with soaring bills, did they ever rob travelers again.