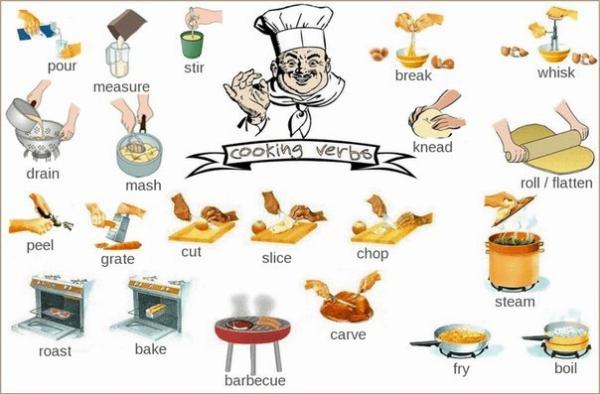 cook: To prepare food by heating it, so the food is not raw.
sauté: To quickly fry food by placing it in hot oil in a смаження pan.
fry: To cook by putting the food into extremely hot oil.
stir fry: To cook small pieces of food moving by it quickly in hot oil.
boil: To heat water until little bubbles form.
steam: To cook by the placing food above boiling water. Steam is the vapor that comes from hot water.
broil: To cook meat or vegetables on a rack with an extremely high temperature.
roast: To cook in the oven or over a fire.
bake: To cook in an oven by using heat.
grill: To cook by putting the food on a grill; similar to barbecue.
barbecue: To cook foods (primarily meat) on a grill by using fire or hot coals.
combine: To put two or more things together.
add: To put ingredients together; to put one ingredient with the others.
crush: To cause to separate or flatten extreme by force, often used with garlic.
beat: To mix quickly and continually, commonly used with eggs.
greaseTo coat oil with or butter.
openTo remove the top from a can or jar.
peel: To take off the skin of fruits or vegetables.
mince: to grind food, normally meat, into small pieces. A machine is often used to do this.
grate: To divide into small parts by rubbing on a serrated surface, usually used with cheese.
pour: To transfer liquid from one container to another.
mix: To combine two or more things using a spoon, spatula, or electric mixer.
break: To separate into smaller parts by force.
cut: To separate or divide by using a knife.
slice: To cut into thin, wide portions.
carve: To cut meat into slices.
chop: To cut into small pieces, generally used with vegetables.
stir: To mix liquid ingredients by moving a spoon around in a circular motion.
knead: To press and stretch dough, usually used with making bread.
melt: to make something become liquid through heating.